I’d been to a lot of countries before my bicycle tour in Myanmar (Burma). I thought I had seen the extremes.  Poverty, wealth, imperialism, religion, oppression, joy, generosity, unrest, injustice, ignorance, and so on. Certainly Myanmar had it all and then some.  Only in Cuba before Myanmar had I seen a culture so very far removed from the westernized society I know so well.

I was only a week into a bicycle tour of Myanmar when my map led me to a dead end.  My map indicated the road continued but, holding the map upside down, the locals laughed and wagged their fingers about its existence. To get back to the main “highway” I needed to backtrack 30 miles (Myanmar uses miles not km). I found a truck headed back that way and tied my bike to a luggage rack. I stepped back to take a picture of this pickup that was the size of an 80’s Toyota (before they got big and fancy) with a topper luggage rack. 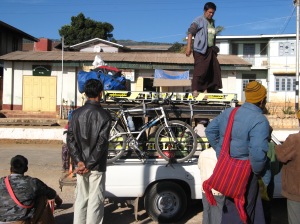 Now, before taking the photo I counted 38 people in and on this truck.  They are not the biggest people in the world but still, that’s a lot of bodies.  I climbed on top at the guidance of the frantic, skirted driver. I clicked a picture of the scene as you see it just below here. I looked at the image and turned my camera around to show the man at the bottom of the photo sitting in front of the monks. Turning the camera to show people I have photographed is a way that I try to make people more at ease with having their picture taken.  The reaction I got was unlike any I’ve ever experienced… 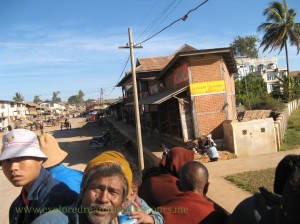 His eyes widened as he slowly backed from the camera. He reached for his cap and began to point at the camera. Now I don’t know what language was his nor did he know mine so hand waving commenced. As he pointed at the camera he looked at me and then began to motion back at himself. I nodded yes and said aloud, “Yes, it is you.” A serious look came over his face as he briefly paused and reflected. He began to smile and laugh and took the camera from my hand. He was exclaiming wildly about this image or camera or magic. The younger men did not respond. He shook the two monks violently in an attempt to get them to look at the camera. I and a few others were now laughing at the scene atop this little pickup truck.  One monk glared sharply at me as if I disturbed his sleeping Buddha. 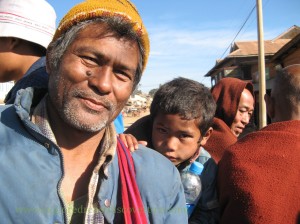 The man turned back to me and handed me the camera.  He gathered a small boy who I assumed to be his grandson, to come be by his side. He gestured with hands and face to have a picture of them taken. The result is seen above.  The image had not even come up on the viewer before the camera was torn from my hands. Grandfather and grandson alike stared in awe at the image. The grandfather, looking me in the eye and smiling, began to speak softly.  I didn’t know what he was saying but he did not break eye contact.  He continued on for a minute before drifting off.  I looked off to a row of temples above the checkered, tilled landscape reflecting on a new extreme. While the reasoning could fall into many of the categories I listed at the outset, how was it that this man had been sheltered from having his picture taken for his entire life?

“Twenty years from now you will be more disappointed by the things you did not do than by the ones you did do. So throw off the bowlines, sail away from the safe harbor. Catch the trade winds in your sails. Explore. Dream. Discover …”

63 thoughts on “This man’s first time seeing his own photo in Tangoo, Myanmar (Burma)”

Talk to me Cancel reply

Put us in your RSS feed

Need something in particular?